Gear reviews for Around Ireland Expedition 2011 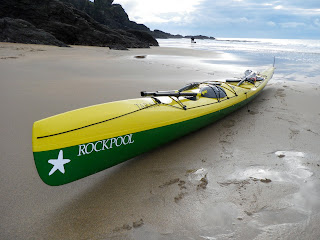 The Rockpool Taran
As mentioned in a previous post, we said that over the next few days we would get our selves squared away and then, whilst Vaughan gets to work on the trailer for the ‘Around Ireland DVD’ Harry and I would look at the gear we chose for the expedition and the reasons behind those choices
First of all, before we look to the gear, let’s look at what the original aim of ‘Around Ireland 2011’.
Aim: Our aim was quite simple, to break a record which had been established some 21 years ago, back in 1990 by Dermot Blount, Brian Fanning, Karl Heery and Mick O'Meara, the record was 33 days.
For both Harry and I, sea kayaking has for the most part been about the journey, exploring new coastlines, cultures and experiencing the richness and excitement of being within a dynamic coastal environment. But over the past few years we have started to find that inside of us, we had a desire to see how far we could push ourselves, physically, mentally and emotionally, in hind sight this was still very much a journey, in many ways a journey that was every bit as rich and rewarding as previous journeys, only this time it was a journey within.
So when Harry suggested we team up in a speed attempt around the Emerald Isle, it hit a chord deep inside, one which was to become every bit as absorbing, if not more so, than any other journey we had done before……the only condition was that we declared up front and let people know what we were planning and allowed ourselves no ‘easy way out’ if we chose along the way, not to go for it.
The Rockpool Taran:
To facilitate a successful conclusion to this speed record attempt we needed a fast boat, the boat that was making all the noise at the time, as well as establishing a whole series of new records was the ‘Rockpool Taran’. Designed and paddled extensively by John Willacey and built by Mike Webb of Rockpool. the Taran has an aggressive and distinctive look about her, very similar in many ways to a white water racer, the difference with the Taran is that she is very much a sea kayak and it turned out, an exceptionally good sea kayak. Another of it’s design differences is that the bottom of the hull is almost perfectly flat, this was really quite radical. Round sectioned hulls are considered to be the fastest shapes through the water, so why was the Taran so fast? I think Harry may have hit upon the answer. Harry, prior to sea paddling, had a lot of experience in sailing and he figured that the flat section hull created a lot of surface tension, which helps to hold the boat down in the water, this means that the water line length remains constantly down in the water which is ideal for into the wind and off the wind paddling, yet when running downwind the flat section also allows the kayak to plane, and boy does it plane. There were going to be other characteristics which would not necessarily lend themselves to being an effective ‘rough water expedition kayak’, for instance to plumb bow, not ideal when landing on a steeply shelving beach, or the fact that the kayak comes with a rudder, what if the rudder goes wrong?
Wild water kayaks have plumb bows and they are forever bouncing off rocks and many modern sea kayak designs also have plumb bows, this effectively means that the overall length remains in action and this equates to speed, speed is a major factor when considering sea worthiness/safety. Especially when having to gain rapid exit off the water or operating in tight weather windows.
The rudder:
Should I use a rudder or a skeg? This has been an endless debate, we chose to use a ruddered kayak because it facilitates speed. Every stroke is a forward stroke and when running down wind the micro adjustments available enable you to link swells repeatedly. The rudder is basically an adjustable skeg and suffers no greater threat of damage than a skeg, both can jam or break and when they do, it affects the handling of the kayak. The important aspect for both Harry and I was that we familiarized ourselves with the handling characteristics of the Taran when the rudder was not in use. We did this and we also carried spares just in case.
Speed:
We seldom got to use the Taran downwind, it’s optimum speed direction, but we found that the kayak would happily maintain a 4.5 knot average in all directions, even in a cross wind/slightly up wind direction, into the wind, as with all sea kayaks the speed would drop in relationship to the strength of the wind.
Comfort:
The comfort rating of the kayak, in all conditions was excellent, we spent upwards of 20 hours per day in this kayak, often in advanced conditions and it felt more comfortable than any other kayak we have paddled before.
Build quality:
The kayaks came to us in a high quality state of build and after several months of heavy use, showed little weakness in the construction methods used.
Mike asked for feedback on the way in which the design can be enhanced for expedition use and our only feed back was for the addition of a bow/stern toggle. A slightly larger fore hatch, a recessed day hatch, a couple more recessed deck fittings on the foredeck, also possibly the addition of a recessed compass housing.
All in all, both Harry and I felt that the new Rockpool Taran, is probably the most exciting thing to happen to sea kayak design in the last 10-15 years and we have already signed up for a new kayak.
Posted by Expedition Paddler at 05:14