You can catch up with all the news  about Jeff's current trip in Norway by following him at http://expeditionpaddler.blogspot.com/
Posted by Expedition Paddler at 15:28 1 comment:

I went for my first paddle since returning from Ireland a couple of days ago, I was trying to hook up with my daughter who was leading a group out on the Roseland Peninsular, but I had not been paddling for more than an hour when my hands started to play up. The blisters left over from what ever affliction occurred on the trip had started to react to the salt water and were stinging, this was a bit uncomfortable, but worse than this, the pain in the bones of my fingers, which I assume to be bruising, was really quite aggravating. This ailment, along with several other aches and pains, must all have been masked by the constant application of pain killers through out the last three days of our paddling. I have to say this is all a little bit disconcerting when my departure date for Norway is only a week or so away!

Anyway on to another, far more interesting subject, I have just got off the phone with Patrick Winterton-Patrick has another project in the offing, an open crossing by sea kayak, from Shetland across to Norway, hoping to leave with Mick Berwick and Ollie Hicks, in or around the 18th July, good luck guy's I wish you luck. For more on Patrick http://www.patrickwinterton.com/

Staying with Patrick at the moment is Chris Duff. 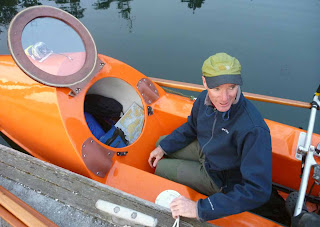 I first met Chis in Anglesey about ten years ago, when he was doing a presentation on an expedition around New Zealand's South Island, an inspirational talker, his words set my feet on fire and prompted me to go to Japan to conduct a journey of my own.

Chris Duff is probably America's most experienced expedition sea kayaker with circumnavigations not only of NZ to his credit, he has also paddled around Great Britain, Ireland and Iceland as well as an 8,000 mile solo sea kayak trip around the eastern third of the US and Canada which kicked his whole expedition lifestyle into play in the first place.

Chris is now about to embark on another adventure, still in a small boat and still crossing through big seas but this time he will be rowing, his journey will take him from John O'Groat's in Scotland, across to the Orkney Islands, then on to the Shetland's, the Faroes and finally a 250mile crossing to Iceland. 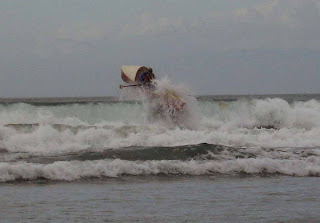 This will be a fantastic adventure to follow guy's and you can do so by looking at his website: http://www.olypen.com/cduff/Frames.html and then following his blog from there.